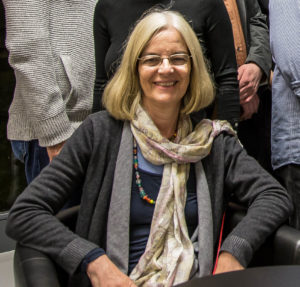 Professor Sarah Hutton from York University studied at New Hall, Cambridge, one of only three colleges at that university which admitted women. She did her doctoral studies at The Warburg Institute, University of London. She has taught at Aberystwyth University in Wales and Middlesex University. The main focus of her research is Early Modern Philosophy and Intellectual History. Much of her work focuses on the neglected thinkers of this period, chiefly the Cambridge Platonists and Women Philosophers. Her publications include British Philosophers of the Seventeenth Century (2015) and, Anne Conway. A Woman Philosopher (2004). She has published many articles on Margaret Cavendish, Damaris Masham, Mary Astell and Émilie du Chatelet. She co-edited a collection of essays on Elisabeth of Bohemia with Sabrina Ebbersmeyer (2022). She is also part of the editorial group of TheNewHistoria.

On January 23rd the Center History of Women Philosophers and Scientists celebrated its acquisition of the manuscripts of Emilie Du Châtelet from the Russian National Library of St. Petersburg with a workshop.

Elisabeth of Bohemia – Life and Legacy

From May 18 to 20, 2018, the conference "Elisabeth of Bohemia (1618-1680) - Life and Legacy. Philosophy, Politics and Religion in Seventeenth Century Europe" took place at Paderborn University and in Herford, Germany. The aim of this conference was to re-evaluate the philosophical achievements of Elisabeth of Bohemia.

Elizabeth of Bohemia Prize throughout the years

Elizabeth of Bohemia – A Philosopher in her historical context

Women Philosophers from the Renaissance to the Enlightenment

A new book by Sarah Hutton and Ruth E. Hagengruber, who will talk at the BSHP pre-conference workshop together with Caterina Pellò, Alison Stone and Rachael Wiseman, is about to be published.

BSECS Conference 2021: Women in the History of Philosophy

Workshop on Methodological Issues with Ruth Hagengruber, Sarah Hutton and Caterina Pellò at the BSECS Conference 2021.

Sarah Hutton interviews Lisa Shapiro on why Elisabeth of Bohemia is an important figure in philosophy, how she became interested in her and what insights she gained from the process of translating Elisabeth's letter exchange with Descartes.
11
November
2014
Masterclass with Sarah Hutton