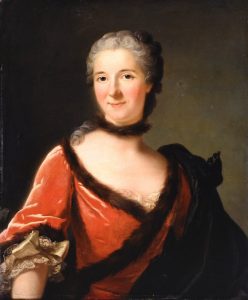 Gabrielle-Émilie Le Tonnelier de Breteuil, between 1750 and 1759, oil on canvas

Children: a daughter and two sons

Emilie Du Châtelet was a philosopher, physicist, and mathematician, and a key figure in the reception and development of Newtonian mechanics in France and beyond. In 1725, she married the Marquis Florent-Claude Du Châtelet-Lomont (1695-1765), and thereafter received an outstanding education, studying mathematics with Pierre Louis Moreau de Maupertuis (1698-1759) and Alexis Claude Clairaut (1713-1765). In 1735, she retired to Cirey, where her family had given shelter to Voltaire (1694-1778). At the Château de Cirey, Du Châtelet established an extensive library and a laboratory with the most up to date scientific instruments. Voltaire acknowledges her significant contributions to his 1738 Éléments de la philosophie de Newton. Shortly thereafter, Du Châtelet published her Lettre sur les Eléments de la Philosophie Newton (1738) and her Dissertation sur la nature et la propagation du feu (1739).

Du Châtelet’s philosophy attempts to reconcile Leibnizian and Newtonian physics within the framework of a Wolffian metaphysics. She presents this vision in her opus magnum, the Institutions de physique (1740/1742). Her defence of living forces as an independent measure of “energy” prompted J. H. Dortous de Mairan to attack her in an open letter. The subsequent dispute was translated into German in 1741 and became an important source for Immanuel Kant’s Gedanken von der wahren Schätzung der lebendigen Kräfte (1749). Johann Augustus Eberhard quotes Du Châtelet’s interpretation of Leibniz in his controversy against Kant. Du Châtelet enjoyed a good reputation as a scholar of the German Enlightenment, characterized by her impartial and truth-seeking mind, and her ability to see into the dense texts of Leibniz and Wolff. She was an inspiration for many philosophers, such as Euler, Diderot, La Mettrie, and Formey. The Encyclopedie of Diderot and D’Alembert reprinted a number of definitions from her Instititutions physiques. She also translated Newton’s Principia into French and commented extensively on it, combining and transforming some of its key concepts with her own Leibnizian insights. She also composed two vast commentaries, the Exposition Abregée du Systême du Monde and the Solution Analytique des Principaux Problêmes qui concernent le Systême du Monde, which were sent for publication days before she died after having given birth to her fourth child.

Du Châtelet’s work covers various philosophical and scientific disciplines, including ethics and politics, natural philosophy, metaphysics, physics, language, and religion. She attacked the idea that the education of women should be based on the subservient notion of “fulfill[ing] the will of the males,” criticized society for excluding half of humanity, and disapproved of nationalistic interests in science. Her vast scientific output demonstrates that Du Châtelet was a unique and independent mind that contributed impressively to philosophy and science.

“I am my own person and only responsible to myself for everything I am, what I say, and what I do. There may be metaphysicians and philosophers whose knowledge is greater than mine. I haven’t met them yet. But even they are only weak human beings with faults, and when I count my gifts, I think I may say that I am inferior to none” – Letter to Frederick the Great, 1740 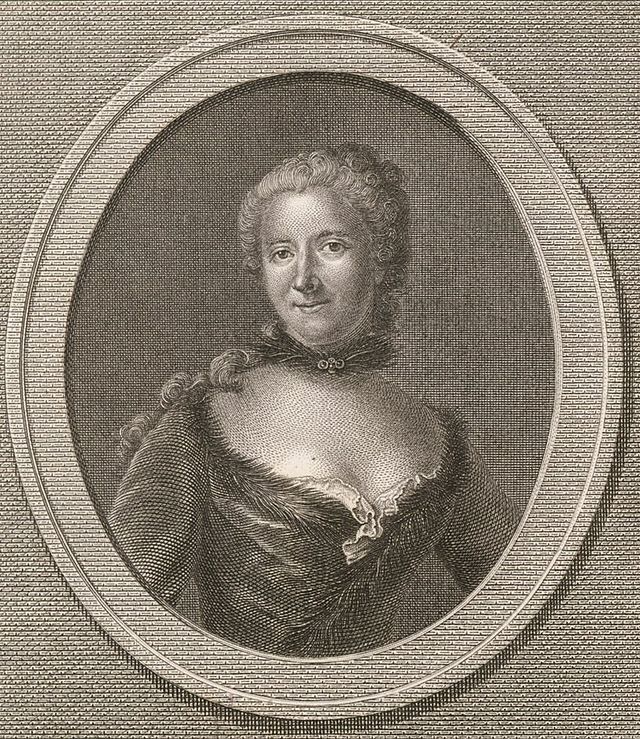 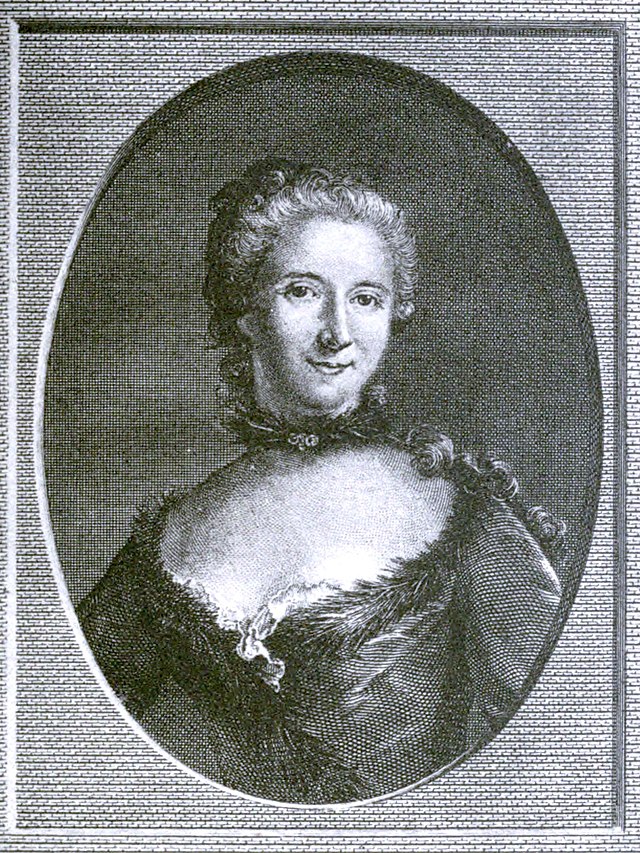 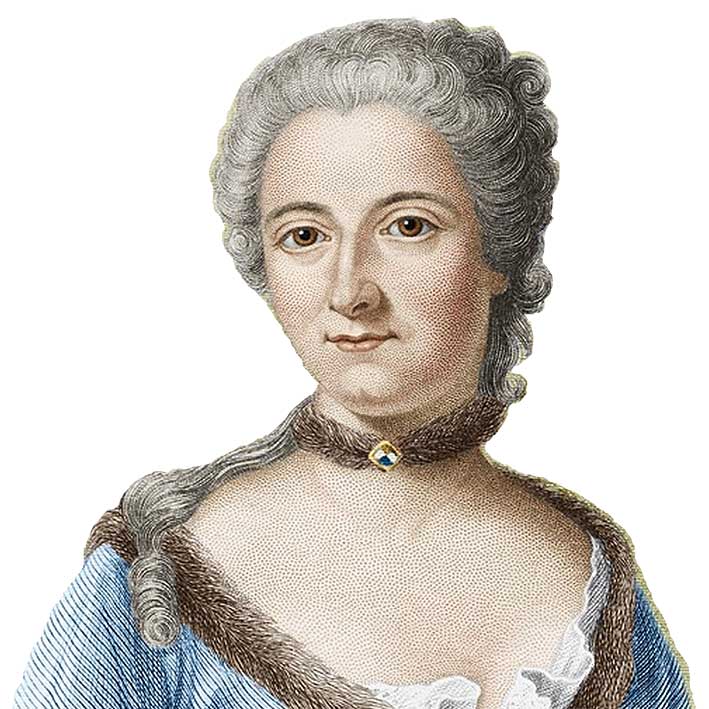 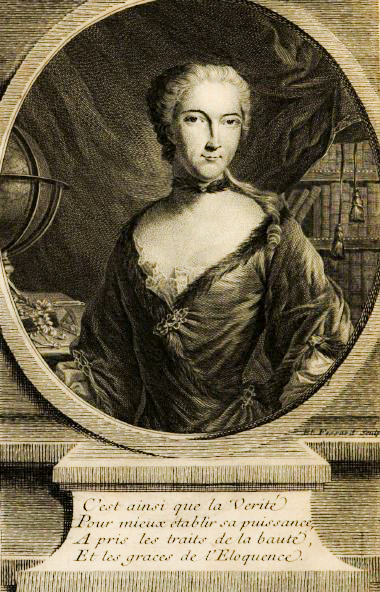 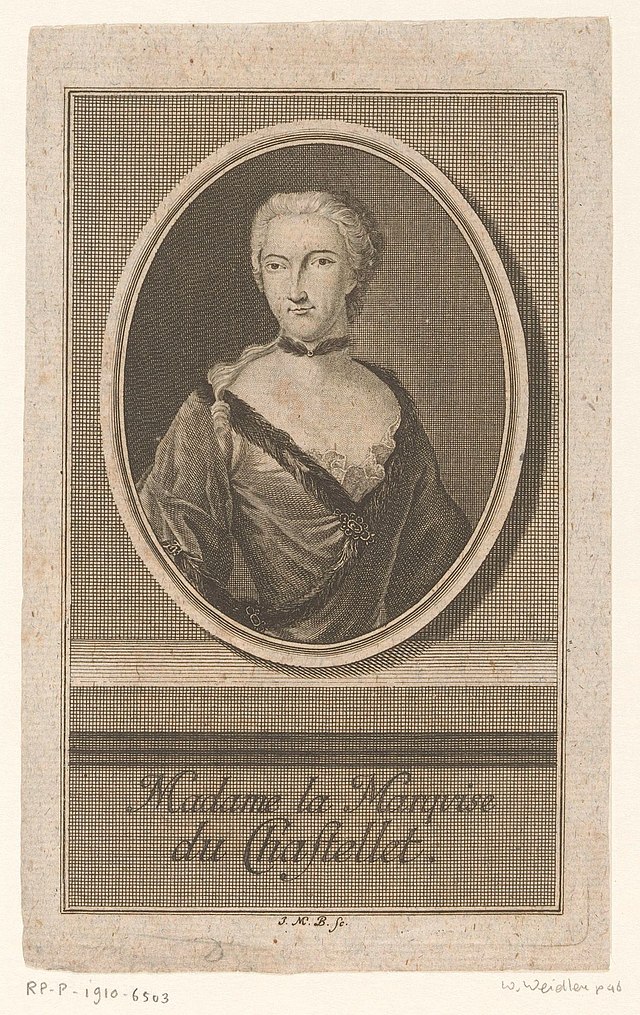 Click here for further information on our events on Du Châtelet