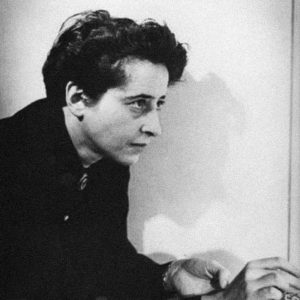 “Men in the plural, that is, men in so far as they live and move and act in this world, can experience meaningfulness only because they can talk with and make sense to each other and to themselves.” ~ Hannah Arendt, “The Human Condition”

“Hannah Arendt was one of the most influential political philosophers of the twentieth century. Born into a German-Jewish family, she was forced to leave Germany in 1933 and lived in Paris for the next eight years, working for a number of Jewish refugee organisations. In 1941 she immigrated to the United States and soon became part of a lively intellectual circle in New York. She held a number of academic positions at various American universities until her death in 1975. She is best known for two works that had a major impact both within and outside the academic community. The first, The Origins of Totalitarianism, published in 1951, was a study of the Nazi and Stalinist regimes that generated a wide-ranging debate on the nature and historical antecedents of the totalitarian phenomenon. The second, The Human Condition, published in 1958, was an original philosophical study that investigated the fundamental categories of the vita activa (labor, work, action). In addition to these two important works, Arendt published a number of influential essays on topics such as the nature of revolution, freedom, authority, tradition and the modern age. At the time of her death in 1975, she had completed the first two volumes of her last major philosophical work, The Life of the Mind, which examined the three fundamental faculties of the vita contemplativa (thinking, willing, judging).” d’Entreves, Maurizio Passerin, “Hannah Arendt”, The Stanford Encyclopedia of Philosophy (Fall 2018 Edition), Edward N. Zalta (ed.).

Our scholars on Hannah Arendt:

Ebrahim Azadegan, Associate Professor at the chair of Department of Philosophy of Science from Sharif University of Technology in Tehran,  Iran: New Voices research profile 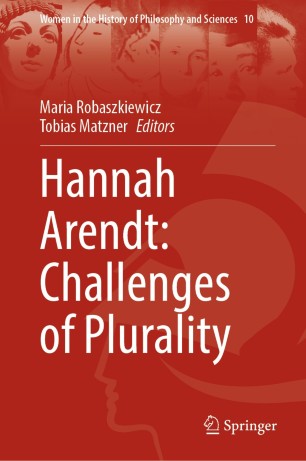 Springer Book Series: Women in the History of Philosophy and Sciences:

This volume explores challenges posed by plurality, as understood by Hannah Arendt, but also the opportunities it offers. It is an interdisciplinary collection of chapters, including contributions from different traditions of philosophy, political science, and history. The book offers novel perspectives on central issues in research on Arendt, reconfiguring the existing interpretations and reinforcing the line of interpretation illuminating the phenomenological facets of Arendt’s theory. The authors of the contributions to this volume decisively put the notion of plurality in the center of the collected interpretations, pointing out that plurality in its dialectic form of commonality, and difference is not only, as assumed by default, one of the most important notions in Arendt’s theory, but the very central one. At the same time, plurality is a central issue in many current debates, from populism and hate speech to migration and privacy. This collection therefore connects the theoretical advancements regarding Arendt and other political thinkers with some of the most pressing contemporary issues. This book will be of interest to scholars and advanced students from philosophy, political theory and related fields studying contemporary challenges of plurality as well as scholars interested in the work of Hannah Arendt.

If you want to know more about women philosophers, feel free to check out our directory or website!

Learn more about Hannah Arendt in the videos below: