Libori Summer School course “Women Phenomenologists of the Early 20th Century”: In 1907, the Göttingen Circle of phenomenologists was founded by Theodor Conrad – one of many students of Theodor Lipps who travelled from Munich to study with Husserl – and Alfred von Sybel – one of Husserl’s early Göttingen followers. Over the next three decades, students from around the globe flocked to study with Husserl in Göttingen and in Freiburg. Among these students were numerous women, some of whom rose to prominence within the early phenomenological movement, namely, Hedwig Martius, Edith Stein, and Gerda Walther.

Martius, who would later marry Theodor Conrad, was one of the so-called “invaders” who came to Göttingen from Munich. On the advice of Moritz Geiger, Martius studied with Husserl, as well as Adolf Reinach and Max Scheler, from WS 1910/11 – SS 1912. While studying with Husserl, she authored Die erkenntnistheoretischen Grundlagen des Positivismus (1913), which then served as her doctoral dissertation under the supervision of Alexander Pfänder back in Munich. Despite her philosophical acumen and the respect of her colleagues for works such as her Zur Ontologie und Erscheinungslehre der realen Aussenwelt (1916) and Realontologie (1923), because women were not permitted to habilitate, Martius was unable to secure an academic position until 1949, when she became lecturer in natural philosophy, and then honorary professor in Munich in 1955. In opposition to Husserl, Martius was a staunch defender of realist phenomenology, and introduced the concept of “real reality” into phenomenological discourse.

Stein came to Göttingen from Breslau to study with Husserl in 1913 at the urging of her cousin, Richard Courant. She remained with Husserl until 1918, completing her dissertation, Zum Problem der Einfühlung (1917), under his supervision, and then working as his research assistant. In the following years Stein attempted to habilitate twice, producing the works Beiträge zur philosophischen Begründung der Psychologie und der Geisteswissenschaften (1922) and Potenz und Akt (1931). Unfortunately, she was rejected both times. In 1932, she obtained a position teaching philosophy at the German Institute for Pedagogical Science in Münster. However, she was removed from her position in the spring of 1932 due to her Jewish ancestry. She died at Auschwitz in 1942. Stein is widely regarded as one of Husserl’s greatest students, though her personal and intellectual relationship with the “Master” was often strained.

Walther was one of the founding members of the Freiburg group of phenomenologists. Like many others, she came to work with Husserl after first studying with Pfänder in Munich. From the summer semester of 1917 to the summer semester of 1919, she attended lectures and seminars by Husserl, Stein, and Heidegger. Her dissertation, Ein Beitrag zur Ontologie der sozialen Gemeinschaften: Mit einem Anhang zur Phänomenologie der sozialen Gemeinschaften (1922), combined elements of Husserl’s mature thought with Pfänder’s views on values and sentiments. After publishing what many consider to be her magnum opus, Phänomenologie der Mystik (1923), she became deeply interested in the paranormal and the occult. This led to her being ostracized from the phenomenological community, and as a result her place in the phenomenological movement has been largely overlooked.

The aim of this summer school is to discuss and critically assess the philosophical works of Hedwig Conrad-Martius, Edith Stein, and Gerda Walther. Texts from each of these women will be read, contextualized, compared, and contrasted. Special attention will be paid to how they built on and departed from the work of their phenomenological teachers – Husserl, Pfänder, Reinach, Scheler – and how the works of the early women of phenomenology engaged in a dialogue with each other. Topics which may be covered include: the concept of being, the realism/idealism debate, the status of the I, empathy, religious experience, and their critiques of Husserl.

Language: The seminar will be held in English. Where possible, primary texts will be made available in English.

General information:
As the number of participants is limited to 15 for each course, please e-mail a one page letter of motivation and a brief curriculum vitae to contact(at)historyofwomenphilosophers(dot)org and cc to the lecturer julia.muehl(at)upb(dot)de until July 15th, 2017.
Everybody interested in this topic is welcome to attend this seminar. A certificate of participation will be presented to you in the closing ceremony. Participation is free. Transport and lodgings have to be organized individually by the attendees. Please bear in mind, however, that the holiday season in Paderborn starts at the end of July. There for we highly recommend to book rooms as soon as possible. 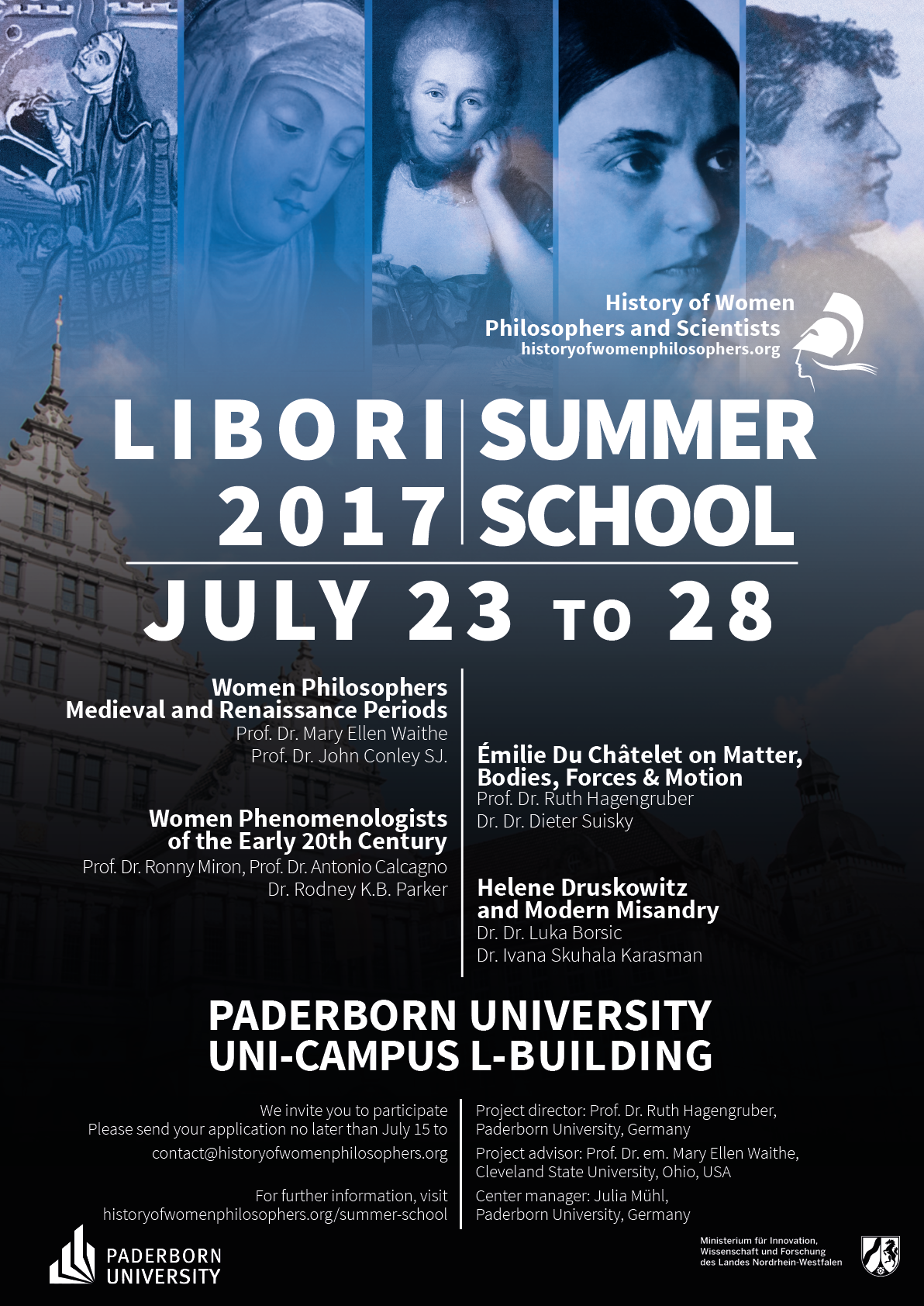