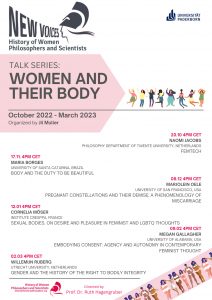 The Winter Term Talk Series, organised by  Jil Muller, Assistant Professor at Paderborn University, is dedicated to Women and their body. The first talk will take place on Thursday, 20th of October, at 4 pm (CTE).

Everyone is welcome to attend. To register and to receive the zoom invitation, please send an email to contact@historyofwomenphilosophers.org

Abstract: Femtech is the collective name for technologies that address female health needs. Femtech applications can, e. g., help women digitally track their period, manage their fertility and support their pregnancy. Although femtech has beneficial potential, there are various ethical concerns to be raised with current femtech apps. In this talk, I will discuss three of the main ethical concerns with femtech apps regarding (1) medical reliability, (2) privacy, and (3) gender stereotyping and epistemic injustice, and I explore how Capability Sensitive Design (CSD), a novel design framework for health and wellbeing technologies (Jacobs 2020), is able to mitigate these concerns and help create morally sensitive femtech.

Abstract: In this presentation, I aim at analyzing the importance of beauty for contemporary women. I begin by showing some traditional views in the history of Philosophy, such as Kant´s conception that “woman is beautiful while man is sublime”. I claim that beauty is still considered one of the main assets for women, not only in the “dating scene” but also in the pursue of a carrier. I show the criticism of beauty practices in the feminist literature. I then argue that in the XXI century, beauty is not only a natural asset but became a duty. From the 20th century on, we see aesthetic procedures becoming popularized, that can be enjoyed by an increasing number of women. Liposuction, Botox, breast prosthesis implants, dental bleaching, modification of the capillary structure are becoming increasingly common and accessible. If, on the one hand, this indicates greater autonomy in relation to the construction of the desired body, on the other hand, being beautiful becomes a duty. Beauty ceases to depend on the natural lottery and becomes a moral duty. Failure to fulfill this duty will be punished more harshly than if ugliness were simply given by nature. Whoever is ugly, is by her own decision, or by weakness of will, by akrasia, a term well known in ethics since Aristotle. For this reason, ugliness is so much more critical and unforgivable. Among the ugliness, one of the most obnoxious features is being fat. In a world that values productivity, speed, and movement, being fat appears as the great sin of contemporaneity. Fat still has an association with two traditional sins: laziness and gluttony. At the end I argue whether beauty is always oppressive, or we could reconceptualize the concept of beauty in order to create a new inclusive idea that incorporates a plurality of bodies.

Abstract: Pregnancy has been a life-changing experience for me. It has been so not only because of my bodily transformation and the amazing two forms of life that emerged, but also because of its painful loss. It has prompted me to ask a simple yet profound question: how to grasp this grief, and how to combat the prevailing cultural discourse that seems in so many ways unsuited to address the ambivalence surrounding early pregnancy loss? One way of accessing the meaning of pregnancy loss is through rethinking the meaning of pregnancy in terms of a constellation. In previous work, I have proposed to view pregnancy in light of the building of a pregnant city, in analogy to Plato’s building of a city in the Republic. Following this thought: what happens when the emerging pregnant city falls apart prematurely? Here it is the liminal experience of early miscarriage (i.e., miscarriage before the 12th gestational week) that I seek to investigate, which is important for 3 reasons. First, this form of ephemeral loss is conceptually under-articulated, yet experientially prevalent: 70 % of conceptions end prior to birth. Secondly, rethinking early pregnancy loss stimulates correction of many accounts of loss that are predominantly focused on the loss of individuated, singular beings, rather than allowing for an analysis of loss at the level of the milieu. Thirdly, recognizing the importance and prevalence of dissipating constellation may bring further understanding and recognition to those caught in the grieving aftermath of miscarriage. I will show that Gilles Simondon’s account of pre-individuation is a helpful tool to both conceptualize the pregnant city in its early formation and in its dissolution, precisely because Simondon discusses a metaphysics of life that focuses not on being, but on being-as-becoming (ontogenesis) and affords a place for processes that are pre-individual.

Abstract: When feminists speak about sexuality they sometimes refer to social and political power structure, sometimes to procreation, others speak about pleasure practices or subcultures and even others refer to questions of identity. At the example of the body, these disparities in feminist thought regarding sexuality become even more evident. While the body has been of crucial interest in feminist and LGBTQ thought, it has only rarely been addressed explicitly and many times in quite negative fashion as Simone de Beauvoir’s very negative views on procreation or menstruation. But also Monique Wittig’s writings on the lesbian body struggle with negative association regarding women’s bodies and more particularly desire between them. It was the so called French feminist school and namely Luce Irigaray and Hélène Cixous that tried to find resources for resistance in the female body and its supposed refusal to submit to the rule of the One imposed by phallocracy. Their writings inspired postmodern and queer studies to inquire new views on the sexual body, on differences between female bodies but also on the possibility of finding lust and pleasure in these bodies. Susan Bordo’s work has become canonical in this sense. In this talk I would like to retrace some of the ways in which the body has been thought of in feminist theories on sexuality in discussing first the body in feminist struggles with psychoanalysis, second, I will address the ways in which the feminist sex wars brought the topic of pleasure back into feminist views on sexuality and gender and, third, I would like to present more recent perspectives on the sexual body including the questions of race and of validity. Can we still find revolutionary potential in our sexual and desiring bodies today?

Abstract: Vanessa Springora’s memoir, CONSENT, caused a firestorm when it was published in France in 2020, as it recounted her sexual relationship with the famed writer, Gabriel Matzneff, that began when she was 14 and he was in his 50s. An open secret at the time, the relationship was tolerated and even encouraged by the adults in Springora’s life, an attitude chalked up by both Matzneff’s defenders and accusers to the permissive attitude toward sexuality and what was sometimes referred to as “seduction” in the post-1968 environment. Response to the memoir was immediate: though the statute of limitations had passed, Matzneff was dropped by his publishers and a pension based on his literary output, much of which traced his many relationships with adolescents, was rescinded. Perhaps more significantly, France finally established an age of consent. Yet a vocal minority has wondered how best to understand Springora’s relationship with Matzneff, as she unambiguously consented to it, albeit as an adolescent. This paper explores the ambiguities of consent presented by Springora’s memoir, arguing that embodiment plays an as-yet unappreciated role in debates about consent. Following Alcoff, the paper demonstrates that current concepts of consent are inadequate to address situations of deep structural inequalities, such as those in Springora and Matzneff’s relationship. It argues that the physical exploitation of Springora challenges two commonplace beliefs about consent that are nonetheless in tension with one another: the first, about the efficacy and desirability of a standard of affirmative consent, and the second, the belief that adolescents cannot act agentically and do not possess sexual autonomy. Reading these two claims with and against each other points toward a new framework for consent grounded in the unavoidable fact of embodiment, as theorized by Beauvoir, Young, and others. Ultimately, embodiment establishes the conditions of possibility under which consent can be established, debated, and refused.

Abstract: When protesters against compulsory Covid-vaccination and face masks shouted ‘my body, my right’, this slogan strangely reverberated earlier feminist demands of bodily autonomy. It reminded us of how strongly the right to bodily autonomy and integrity has become associated with women’s bodies. Especially in recent human rights discourse, bodily integrity often refers to protection from female genital mutilation. However, a historical perspective can reveal the gendered and racialized notions of the body that have been informing the notion of bodily integrity. The history of human rights has come to be written as a mostly progressivist history of the increasing inclusion of human rights -based on a universal body- in covenants. Scholars point to several originating moments of the right to bodily integrity/autonomy: early modern contract theory; the Enlightenment emphasis on equality; the abolition of slavery; human rights treaties formulated after the Second World War (such as the Universal Declaration of Human Rights (1948) and the European Convention on Human Rights (1950)); the movement for patients’ rights; and feminism in the 1970s-1980s. In this paper, I analyze specific forensic practices in which the right to bodily integrity came to be formulated. For instance, in the Netherlands in the mid-twentieth century the bodily integrity of convicted male sex offenders was safeguarded in the debate on castration as a condition for early release from prison. At Heathrow Airport in 1968-1979, official virginity tests were performed on Southeast Asian immigrant women to ensure the protection of white British women and the British social security system. Meanwhile, the physical examination of female rape victims, for a long time done with the physicians’ fingers, was only qualified as ‘second rape’ by feminists from the 1980s. It is in these practices, I argue, that the gendered body and its boundaries are shaped. They unveil that the body that is entitled to bodily integrity often belongs to the (white) male suspect, not to the female victim.

Women in History on Education