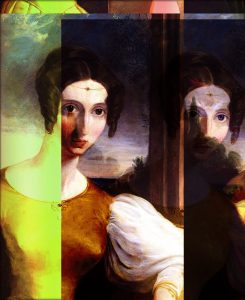 Harriet Taylor Mill was an English philosopher and early advocate of women’s rights whose philosophical contribution is often subsumed under the works of her husband, philosopher John Stuart Mill. She has been identified as the principal author of the seminal feminist essay “The Enfranchisement of Women” (1851), in which she argued for full legal, social, and economic equality for women. She argued for women’s full participation in public life, especially in the workforce:

“Even if every woman, as matters now stand, had a claim on some man for support, how infinitely preferable is it that part of the income should be of the woman’s earning, even if the aggregate sum were but little increased by it… Even under the present laws respecting the property of women, a woman who contributes materially to the support of the family, cannot be treated in the same contemptuously tyrannical manner as one who, however she may toil as a domestic drudge, is a dependent on the man for subsistence.“

Women had been oppressed and excluded from public life because of their biological function in reproduction:

“The maternity argument deserts its supporters in the case of single women, a large and increasing class of the population; a fact which, it is not irrelevant to remark, by tending to diminish the excessive competition, of numbers is calculated to assist greatly the prosperity of all. There is no inherent reason or necessity that all women should voluntarily choose to devote their lives to one animal function and its consequences. Numbers of women are wives and mothers only because there is no other career open to them, no other occupation for their feelings or activities. Every improvement in their education, and enlargement of their faculties, everything which renders them more qualified for any other mode of life, increases the number of those to whom it is an injury and an oppression to be denied the choice. To say that women must be excluded from active life because maternity disqualifies them for it, is in fact to say that every other career should be forbidden them, in order that maternity may be their only resource.“

“But, secondly, it is urged, that to give the same freedom of occupation to women as to men would be an injurious addition to the crowd of competitors, by whom the avenues to almost all kinds of employment are choked up, and its remuneration depressed. This argument, it is to be observed, does not reach the political question. It gives no excuse for withholding from women the rights of citizenship. The suffrage, the jury-box, admission to the legislature and to office, it does not touch.“

“The real question is, whether it is right and expedient that one half of the human race should pass through life in a state of forced subordination to the other half. If the best state of human society is that of being divided into two parts, one consisting of persons with a will and a substantive existence, the other of humble companions to these persons, attached each of them to one for the purpose of bringing up his children, and making his home pleasant to him, if this is the place assigned to women, it is but kindness to educate them for this; to make them believe that the greatest good fortune which can befall them is to be chosen by some man for this purpose; and that every other career which the world deems happy or honorable is closed to them by the law, not of social institutions, but of nature and destiny.

When, however, we ask why the existence of one half of the species should be merely ancillary to that of the other; why each woman should be a mere appendage to a man, allowed to have no interests of her own, that there may be nothing to compete in her mind with his interests and his pleasure, the only reason which can be given is, that men like it.“

The relevance of Taylor’s work still bears consideration today! More Information about her can be found in the following videos or in our directory. In addition, you can take a look at our online teaching page on mill.