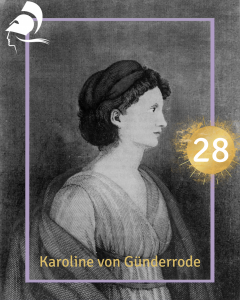 ’s work Letters of Two Friends illustrates her interest in Far Eastern and Nordic mythology, philosophy and religion, as well as her longing to unite and fully understand the world with the self. The mentioned Eusebio was her great, unfortunately unrequited love. She writes to him:

“With her a new life has dawned upon me, for only in you have I found that true elevation to the highest views, in which all worldly things disappear as an insubstantial dream, as a ruling state. In you the highest ideas have also attained an earthly reality for me. We other mortals must first fast and prepare ourselves physically and spiritually if we want to go to the Lord’s Supper; you receive God daily without these preparations.” (Letters of two friends, translation by Jil Muller)

In our ECC, Anna Ezekiel defines love in Günderrode as follows:

“For Günderrode, “love” describes the connection not only between individuals, but also between individuals and the cosmos. On Günderrode ’s account, the succession of individual entities that make up the world are manifestations of a unitary “idea” or “spirit” as it recreates itself in various forms until it achieves perfect identity between form and essence.”

If you are interested in Günderrode research, find Scholars from our New Voices network.

Furthermore, we have a Podcast on Günderrode’s concepts of Space and Time, from Prof. Chelsea Harry. 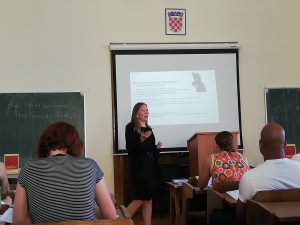 g during our Croatia Libori Summer School, where Prof. Harry showed how Günderrode explained the meaning of philosophy trough the concept of love.