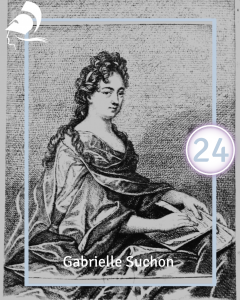 In the Preface of her Petit traité, Suchon writes:

“Men have so degenerated from the esteem & tenderness which they owe to persons of the Sex, that it may be said with truth, that they have renounced a part of themselves, by the contempt which they continually make of women” (Suchon 1693, Translation Jil Muller).

However, Suchon, unlike many other female writers, did not simply support the equality of men and women, but posited it only in order to go beyond it – that is, to show that, under certain conditions, women can become better than men, and therefore superior. Charlotte Sabourin evaluates Suchon’s position regarding the equality of women and men as follows:

“[…] if Suchon defends an equality of capacities, she cannot be classified among the supporters of an egalitarianism aiming at assimilating the women to a supposedly egalitarian model and which would be in fact thought starting from the men. On the contrary, for Suchon, the vast majority of men are corrupted by the power they hold. The elevation of women cannot therefore be accomplished by adopting men as a model; rather, it must aim to surpass them.” (Sabourin 2017, p. 217, Translation Shari Wölker)