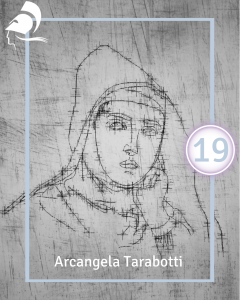 As a successor to the Renaissance tradition of Women Philosophers, the Venetian nun Arcangela Tarabotti harshly criticizes the paternal tyrannical power in the ecclesiastical institutions. The conditions for girls and women in these institutions are unbearable for Tarabotti.

Ruth E. Hagengruber points out: “Tarabotti is bitingly critical of the church’s mixing of religious and social goals and of the consequences that are carried out on the backs of women. It has long since ceased to be the task of convents to serve the worship of God; rather, they are a ‘dumping ground’ for handicapped, illegitimate and unwanted children, dumping grounds for superfluous daughters. She blames her father for forcing her into the monastery, robbing her of youth, freedom and life. All this is propagated and supported by the church as an act pleasing to God, the father’s violence is covered by the institutions of the church. The church becomes a functionary of patriarchal despotism, part of a social formation that rules over women, breaks their will and abuses them for its own purposes. What does this practice have to do with religion? Tarabotti, in her writings that still seem radical today, points out the absurd denigration that makes women ‘captive animals’ of their institutions” (Tarabotti 2004 and Panizza 2006 107-28 in Hagengruber 2020, 43-44, Translation Ruth Edith Hagengruber).

Panizza, Letizia. (2006) ‘Reader Over Arcangela’s Shoulder: Tarabotti at Work with Her Sources’. In Arcangela Tarabotti: A Literary Nun in Baroque Venice, edited by Elissa B. Weaver, 107–28. Ravenna: Longo Editore.