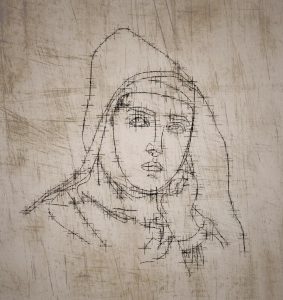 (painted and edited by Sophie Unger)

Although she received a rudimentary education at the convent, Tarabotti describes herself as an autodidact. She strongly criticizes the monastic education: In her opinion, classes are offered mainly by nuns who understand less than she does. She also complains about her faulty Latin, which she considers to be due to her inferior education. Nevertheless, a broad knowledge emerges from her works, which she acquired herself. References that are beyond the education in female monasteries such as those of Ovid, Dante, Petrarch, Boccaccio, and even Machiavelli are evident in her works.

Tarabotti probably began to write in the late 1630s. During her lifetime, she published five works. She circulated the manuscripts of her earliest work Tirannia paterna (Paternal Tyranny) and intended to publish it for over two decades. It was finally published posthumously in Leiden in 1654 under the pseudonym Galerana Baratotti. In this work as well as in her early Inferno monacale (Convent Hell), also not published during her lifetime, she highly criticizes the coerced monachization of young girls and the treatment they face in convents.

Her first published work Paradiso monacale (Convent Paradise), published in 1643, praises convent life and the spiritual connection of willing nuns. This is not inconsistent with her previous work, as Tarabotti makes a firm distinction between voluntary vocation and forced vocations of women. Her second published work L’Antisatira (The Antisatire) (1644), was a response to Francesco Buoninsegni’s Contro ‘l lusso donnesco satira menippea (1638), a satire of female vanity and vice. Tarabotti defended women’s intellectual capacities and mocked men instead. The next work Lettere familiari e di complimento (Letters Familiar and Formal) was published in 1650 and is a collection of 256 letters that present her, among other ideas, as a strong advocate for women. Le lagrime d’Arcangela Tarabotti per la morte dell’Illustrissima Signora Regina Donati (Tears of Arcangela Tarabotti Upon the Death of the Most Illustrious Signora Regina Donati) (1650) is the next work of Tarabotti, in which she celebrates the deceased nun Regina Donà. The final work that Tarabotti published 1651 during her lifetime is Che le donne siano della spezie degli uomini (That Women Are of the Same Species as Men), a response to the misogynist treatise Che le donne non siano della spezie degli uomini: Discorso piacevole, tradotto da Orazio Plato romano (That Women Are Not of the Same Species as Men: An Entertaining Discussion Translated by the Roman Orazio Plato) that claimed that women do not have souls. Superficially, the attack of the Treatise was not directed at women but at the flawed reasoning of Anabaptists. Tarabotti however, argues that the “joke” is still related to the subjugation of women and that it is not a mere rhetoric. She highlights the flawed reasoning of the author, always in favour of women’s worth.

At the age of 48, in 1652, Tarabotti died in Sant’Anna. During her lifetime, thanks to her cirulated and published works, Tarabotti received recognition not only in Venice and Italy, but in Northern Europe. After her dead, she was a rather unstudied figure. A biography on Tarabotti, published by Emilio Zanette in 1960, brought her back in the intellectual sphere. She is now considered as an early advocate for women’s rights.