10:30 – 11:30 Francesca Greco, Some Practices of Exclusions based on the Philosophical Historiography in Italian Language

11:30 – 12:30 Namita Herzl, Philosophical Mechanisms of Marginalisation in a Global Perspective

14:30 – 15:30 Björn Freter, The Cycle of Superiorism. Practices of exclusion in western philosophy

Online workshop hosted by the Teaching Area on Diversity at the Paderborn Philosophy Department (In der Philosophie zu Hause: www.uni-paderborn.de/in-der-philosophie-zu-hause) and the Center for the History of Women Philosophers and Scientists (https://historyofwomenphilosophers.org/ ).

The workshop will be joined by Björn Freter (Lecturer in World Philosophy, The School of Oriental & African Studies SOAS, University of London) and Namita Herzl (Researcher at the Koselleck-Project – Histories of Philosophy in a Global Perspective, University of Hildesheim).

This workshop is also a cooperation with the Arbeitsgruppe ‘Frauen in der Geschichte der Philosophie’, which I am directing on behalf of the Deutsche Gesellschaft für Philosophie. (https://dgphil.de/verbaende-und-ags/arbeitsgemeinschaften/ag-frauen-in-der-geschichte-der-philosophie/ )

Outline of the thematic background of this event:

Philosophy often presents itself as an enterprise in which everyone is invited to participate. On closer inspection, however, it is striking to note that a significant number of people have been and are being excluded by philosophers as unfit for philosophy. If we look at the history of Western philosophy, we soon find that certain human beings have been radically excluded time and time again. Since the eighteenth century, for example, it can be clearly stated that philosophers who were not perceived as male, who were not racialized as white, or who were not ascribed to Western culture, were systematically excluded from philosophy. However, in this very story, we cannot find not a single philosophical argument that could justify this exclusion. This is hardly surprising; it is doubtful that there can be such a philosophical justification. Who should legitimately be able to have this right? And yet it is a factual reality that philosophy is not ruled by all human beings, but only by very specific human beings. This is certainly not because only these particular human beings practice philosophy, but because these particular human beings, knowingly or not, keep alive a tradition of exclusion. In this workshop, we wish to expose this phenomenon from different perspectives be it based on examples, be it through general reflections. We want to promote an exchange on this problematic dimension of philosophy and its history and thus contribute to the ongoing change of the discourse and a renewal of the canon. 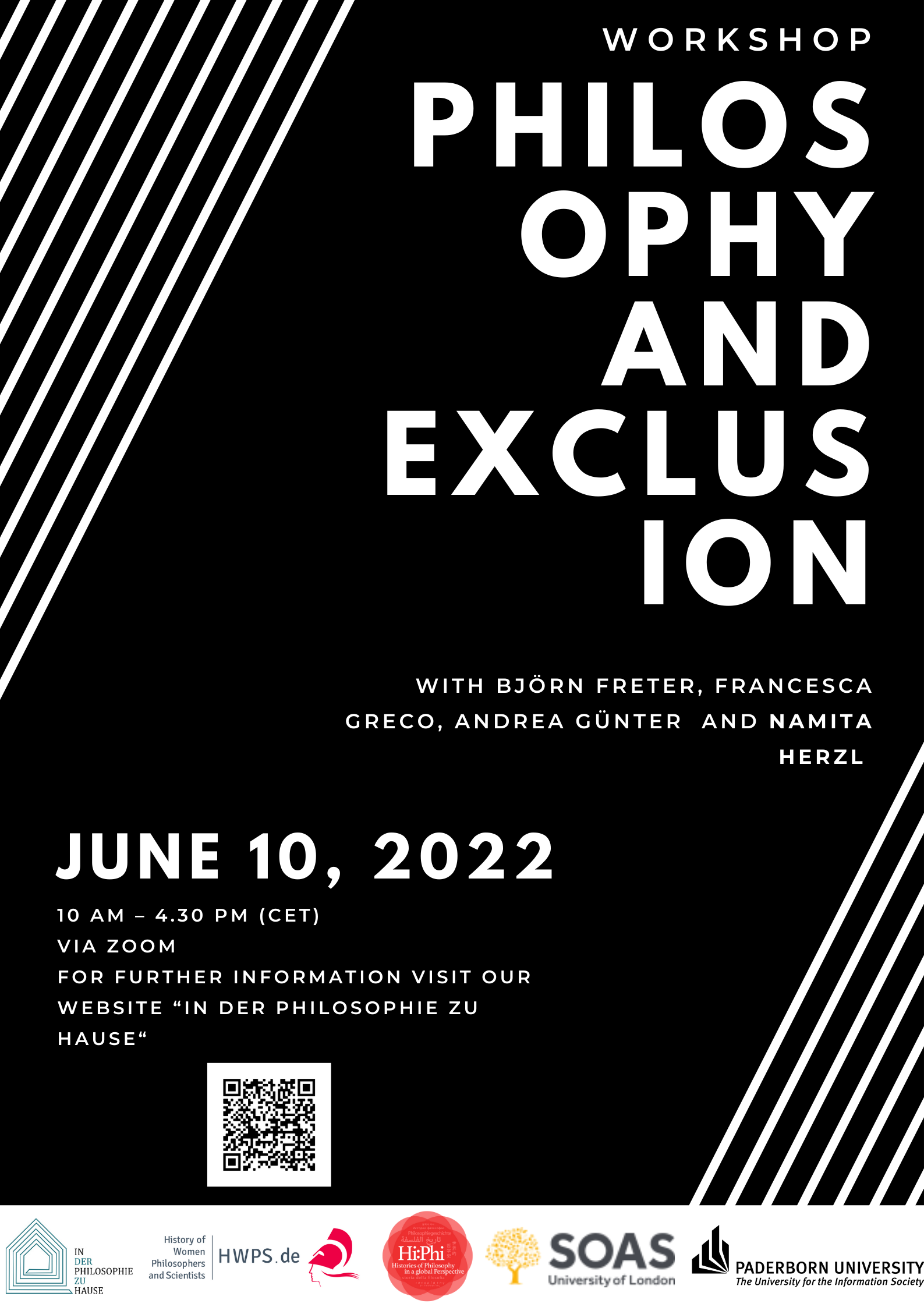