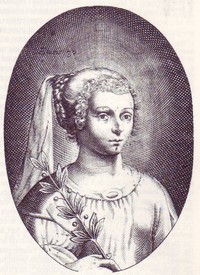 Marie de Gournay (née Marie Le Jars) was born in Paris on 6 October 1565, as the eldest of six children of an impoverished landed noble family in Picardy. Although purely self-taught, she became one of the most learned women of her time.

Her father, Guillaume Le Jars, bought a castle and a seigneury in Gournay-sur-Aronde before his death in 1578, when Marie only was thirteen years old. Her mother decided to establish her family in Gournay in 1586. Not caring much about her daughter’s intellectual disposition, she brought Marie up according to the “female code” of the nobility of the time. Marie was not satisfied with this upbringing and learned on her own Latin and Greek, comparing the original texts with their translations.

It was at the age of eighteen that she discovered the first edition of Michel de Montaigne’s “Essays”, which she said “filled her with admiration”. Five years later, in 1588, during a trip to Paris with her mother, she sent Montaigne a note expressing her ardent desire to see him. They met the very next day. She was twenty-three and he was fifty-five. In the months that followed, Montaigne stayed at the Château de Gournay for several weeks at a time. It was during a walk, after a joint reading of Plutarch, that she told him the story published in 1584 under the title Le Promenoir de M. de Montaigne. A deep friendship developed; and Marie became the custodian of his literary estate.

In Chapter XVII of Book II of the Essays, he calls her a “daughter of the covenant”. Marie did not see him again after this meeting, but she corresponded regularly with him. Her mother died in 1591. Marie moved to Paris, leaving the castle to her brother. Montaigne died in 1592. She did not learn of his death until fifteen months later. The philosopher’s widow sent her an annotated copy of the Essays of 1588 and asked her to take charge of their publication. She set to work and brought out the first posthumous edition of the Essays, with a long preface in which she defended Montaigne’s ideas. She died on 13 July 1645 in Paris.

Her literary production includes translations of Tacitus, Ovid, Cicero and Virgil, writings on translation, literature and language theory, occasional poems, a short novel (Le Proumenoir de Monsieur de Montaigne) and treatises on morality, theology, and the situation of women. She published her collected works in 1626 in the volume Ombre and again in 1634 and 1641 as Les advis ou les presens de la demoiselle de Gournay.

In her feminist writings, especially in the “Complaints of the Ladies” (Grief des Dames), she named the lot of women as fearlessly as hardly any of her contemporaries did (it is the height of the witch burnings in Europe).