There comes a time when a book deserves to be revised and reprinted. That time has come now for Émilie du Châtelet’s Institutions de physique. December marks the 315th anniversary of her birthday and in this context the historical-critical, online edition of her major work, Institutions, will be launched, beginning with the edition of the Avant-Propos.

The editorial work on this text has given our three editors not only work but also pleasure. In the foreground of their work was the reading, deciphering, interpreting, and understanding of the original text, which proved not always to be easy due to Du Châtelet’s handwriting and her revisions of the text. Then the text had to be elaborated in such a way that it will be accessible to a wider audience. In the meantime, however, the desire to analyse this text tickled the editors, because its different versions raise interesting ideas and reveal something of the author’s personality. The different handwritten versions, which had to be transcribed first, reveal so many facets even before the text is properly analysed, which makes the editorial work somewhat exciting and interesting. 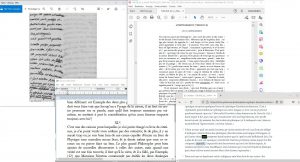 Besides, there are the various tools used to convert the text into an elaborate diplomatic as well as reader-friendly online-edition. In a first step, the manuscript was transcribed in Classical Text Editor, then converted into a PDF to make the text easier to proofread. Then the text was converted to xml so that it could be uploaded to the website, and finally the text was read through again to improve the small remaining errors. This is a really thrilling and fascinating work at the end of which a thorough historical-critical edition shall be presented. The edition of the Avant-Propos only marks the starting point in order to share our work in progress with the scientific community.

If you want to learn more about the editorial work and check out the online edition, stay tuned! In December, there will be the Émilie du Châtelet Month at the Center for the History of Women Philosophers and Scientists, in Paderborn, and we’ll be posting news regularly, leading up to the big online event when the Avant-Propos of the Institutions goes online.