VivaMente Pisa 2022: From Automata to Transhumans

Jil Muller organises an International Conference with the VivaMente: the Garden of Ideas 2022 award, on autamata and transhumanism.

An important part of the contemporary debate on human nature was shaped by debates taking place in early modern Europe in the attempt to remove the animal part of the human mind by turning it into an abstract monad while converting the body into a machine. Humans gained the promise of certain and universal knowledge (mathesis universalis) but began thinking of themselves as automata, bereft of individuality and real agency. Much of the questions raised back then resonate with us still nowadays:

This edition of the Vivamente Conference in the History of Ideas intends to shed new light on the early modern origins of automata, to discuss the impact of their legacy throughout the seventeenth, eighteenth and nineteenth centuries, and, finally, to ask the fundamental question of how to update our knowledge – in both theoretical and moral terms – concerning automata and automation as we are confronted by a staggering and constantly evolving volume of information and innovations on the subject. Discussions will also address the field of post-human and trans-human speculations. The future is looming with the possibility of increasingly sophisticated mechanical minds in addition to the more familiar – both philosophically and technologically – mechanical bodies.

Three members of the Center for the History of Women Philosophers and Scientists will take part in this event. Prof. Dr. Ruth Hagengruber will give a talk on “Inventing the Knowledge for the Universe. Changing Ideas from the Renaissance to Today”; Dorian Weiß speaks about “Ayn Rand Today: The Problem of Implicit Tribalism by Social Networking” and Dr. Jil Muller will present a paper on “Descartes on Clocks & Automata”. 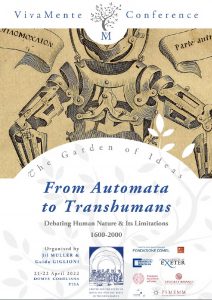