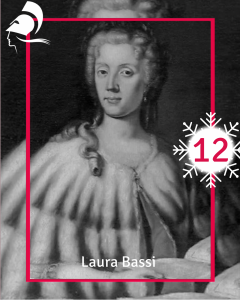 was an outstanding Italian physicist, mathematician and philosopher of 18th century Europe. Bassi was one of the earliest female scientist to earn a docorate degree and one of the earliest women to be appointed professor. Bassi introduced Newtonianism to Italy and was a critic of Cartesian philosophy and physics.

“After her plea for the simple explanations she comes to the question whether the philosophical systems, which are able to derive all phenomena from very few basic principles, do not satisfy this criterion of simplicity in a special way. What, asks Bassi, could be more beautiful and simpler than the two Cartesian basic principles of matter and motion? She then, starting from these principles, develops step by step Descartes’ trains of thought up to his theory of vortices. Her presentation becomes increasingly ironic and shows the reader the whole absurdity of the attempt to explain the world with a philosophical system. But if, according to Bassi’s didactic application, even such a great mind as Descartes gave in to the temptation to exceed the limits of his knowledge, how much more are not all others endangered and in their quest for knowledge need the admonition to moderation and modesty.” (Ceranski 1996, p. 77, Translation Shari Wölker)

“To summarize Laura Bassi’s career, she is an important example of a woman who broke the mould imposed on her sex for thousands of years. Laura received the same humanistic education as contemporary men. As a prodigy, she showed early interest and abilities in philosophy, science, mathematics, languages, and rhetoric. She was one of the earliest Italian philosophers to become interested in Newtonian physics and in the new mathematics (calculus). She made the transition from humanism and literature to science during the years that followed her Theses defense in 1732. She strongly believed in the value of experimentation to demonstrate concepts and principles. Laura made the transition from the ‘old science’ to the ‘new science’.” (Frize 2013, p. 174)