Colloquium | 4:00 PM - 7:00 PM | Center for the History of Women Philosophers and Scientists

The Center for the History of Women Philosophers and Scientists at Paderborn University presents a round-table discussion in honor of the 310th anniversary of Émilie Du Châtelet`s birthday. Stefanie Ertz and Ansgar Lyssy will give a talk.

Stefanie Ertz (Berlin Brandenburg Academy of Sciences) will present her research on Émilie Du Châtelet’s Grammaire raisonné. Stefanie Ertz, former research assistant in the project of the Leibniz Edition Potsdam, is an expert on natural law in Early Modern Europe and on the reception of Port-Royal Logic.

Ansgar Lyssy (Ludwig-Maximilians-University of Munich) talks about the transformation of the principle of the least action from a metaphysical to a physical principle in the first half of the 18th century. Ansgar Lyssy has written his PhD thesis on “Kausalität und Teleologie bei G. W. Leibniz (Causality and Teleology in G. W. Leibniz)” and is currently focusing on the concept of mankind in the philosophy of the German Enlightenment.

The importance of Émilie Du Châtelet with regard to the philosophical debate on the principle of the least action, as well as for the history of reception of Port-Royal Logic, is a terra incognita of the Du Châtelet-research.
All interested parties are welcome. The event will be held in German. 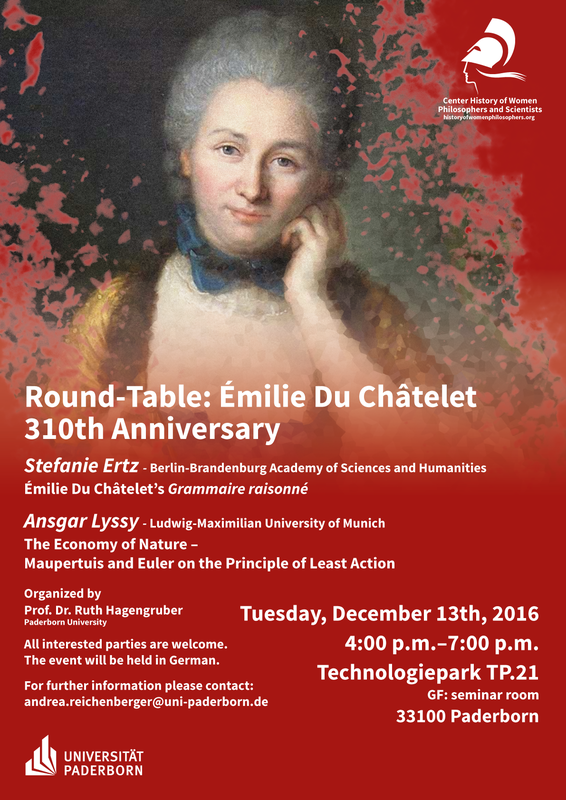