Giving Life to Politics – The Work of Adriana Cavarero

This three-day conference is a sustained engagement with, and celebration of, the life work of Italian feminist philosopher Adriana Cavarero. It also marks the publication of her most recent text “Inclinations: A Critique od Rectitude” (Stanford University Press, 2016).

Adriana Cavarero has been at the forefront of continental feminist philosophy for the past four decades, working in the interstices of sexual difference theory, post-structuralism, political philosophy, literature and classical thought. Her books have addressed a range of themes, including feminist political philosophy (In Spite of Plato, 1995; Stately Bodies, 2002), narrativity (Relating Narratives, 2000), the voice and vocality (For More than One Voice, 2005), and contemporary forms of violence (Horrorism, 2009). Common to all of Cavarero’s work is an extension of Hannah Arendt’s conceptualisation of uniqueness, an insistence on the vulnerability of the human condition, and an immanent critique of western metaphysics.

CFP: Abstracts of up to 500 words which respond to any aspect of Cavarero’s work should be submitted by no later than 28th February 2017 to Ian Sinclair: I.A.Sinclair@brighton.ac.uk. There are however a limited number of places at this conference. We will prioritise abstracts as they arrive.

The University of Brighton’s City Campus is in the centre of Brighton, a ten minute walk from Brighton railway station. Brighton is thirty minutes by train from Gatwick Airport and around an hour from central London. The campus is near many hotels, guest houses, restaurants, bars and pubs. Brighton and Hove is a major tourist destination in the south-east of England. Consider staying longer to see more of the city if you are able to. 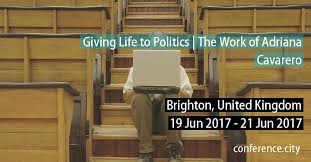